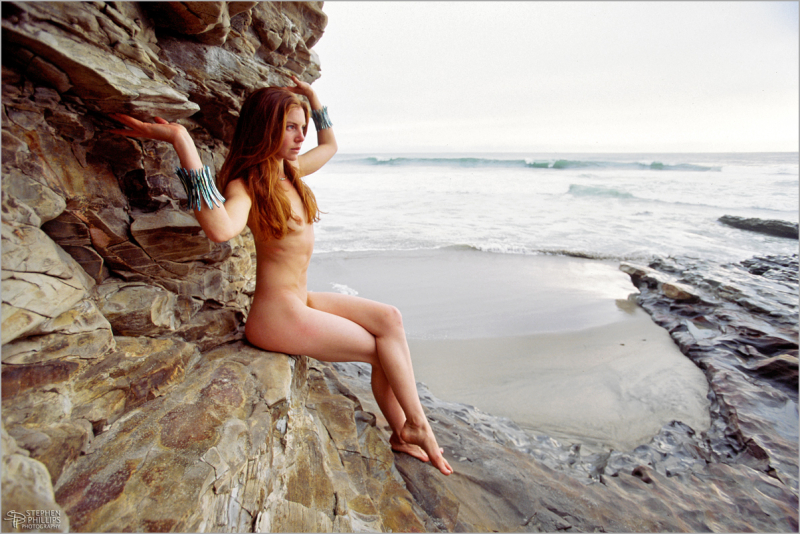 Woman on the Cliff - revisited

We return for another visit with Jesse - the model (and friend) who graced my blog on Thursday and Friday. As I read the comments that were left for 'Cliff Hanger' on Friday - the need for me to expand on my words became obvious...

Jesse is an accomplished healing-arts and acupressure therapist. She started posing for me back in 2003 - and had never worked with a photographer before! Her natural talent just dazzled me. She displayed a presence in front of the lens could not have been more natural, graceful, and self-assured. I might suggest a vision I had for a setting - but I rarely needed to pose her. She instinctively knew how to employ the light and setting and would start striking poses as I clicked and re-positioned the tripod. It was like dancing with a partner that could anticipate your every move.

I write this in the past-tense because she retired from modeling two years ago - wishing to spend more time with her daughter and focusing more on music. Since first meeting her - Jesse has lived in Mexico, Europe, Ireland, and Minnesota. She was here briefly in December - before heading off to northern California on her way to San Diego. (this is not a misprint)

I have no idea where she is just now.

Finally - on this cliff series - I didn't suggest that Jesse do the pose we saw on Friday. She took one look at the rock face - and the next thing I knew - she was up on the face and contorted into that position - bracing herself as she knew darn well I wasn't ready to shoot yet! If that made you nervous - you should see her working a skateboard or riding a horse bareback - nude. We logged many miles and managed a lot of work. I am so grateful for the images we produced together. I miss her and wish her very well...
Two more favorite images - from different venues - tomorrow and Tuesday.

A beautiful photograph and incredible color tones - her hair matches so perfectly with the rocks and the coastline with the waves is perfect! Great work Stephen!

A great pose. For me, this ties the blue of the cool bracelets into the water colors - and the contrast for the red tinted hair to the blue is a special bonus.

@Bill: Thanks Bill - it was beautiful light that morning - really bringing this together.

Thanks very much. Stephen, for all you tell about Jesse. She looks like a ver special person gifted with various graces, and I think that you catched something of in the two photos you showed. It's a pity she's retired from modelling, but I think she is clever: it's best soon than late.
I think also that if she reads what you have written she will be very grateful also: there are beautiful words.
I like very much this pose in the context. And I like her body very much, but the strength in his face and expression is the best.
Cheers.

@Paco Díaz: Thanks, Francisco - you are very kind. I'll be sure that Jesse sees what you have written.

This is breathtakingly beautiful. Great work by both of you!

fantastic shot, she must be an amazing person

so interesting with good colors

Beautiful shot...a goddess in your frame of the power of nature.

Well done. I really love the way you placed her in nature and still managed to have her be the star of the shot.

Love this shot! She is incredibly beautiful! The colours and textures work so nicely together! Stunning composition. Bravo!

Jesse seems like a special person, and a joy to photograph, as you've made quite evident. How nice that she could instinctively pose giving you the opportunities to take these fabulous shots!!

What a gorgeous model. I loved the "cliff hanger" shot, as well as this one. What a shame you've lost touch. Final word -- I hope she's eating! She could use a little meat on her bones! Or maybe I'm just jealous. ;)

@Lesley: Believe me Lesley, she eats. But you can't slow her energy. And who would want to.

She appears here to be a sort of "Lady Atlas" with the weight of the world balanced with ease, and so gracefully, on her two upstretched hands. No sweat.

Beautiful. She looks like she belongs there. Working with her sounds incredible, too - I've never worked with a model before. I like your comparison to a dance partner.

@willow: I love working with models and found this dance analogy works. The first shoot is usually a bit awkward and after that you begin finding one another's vision and the magic begins.

this is a beautiful pose you designed here for the model. nicely shot with a cool angle!

Jesse has a natural beauty air about her. You have captured it perfectly, Stephen. That is a skill that is hard to develop. A truly beautiful and appealing photograph.

She has a very beautiful profile. Very nicely done.

She's really dancing my friend...she touches my heart through your smart and beautiful shot.
well done and keep it up, you delight me.

@Amr Tahtawi: Bless you, Amr - thank you for the kind words.

Stef67 from in my head, France

beautiful, beautiful photo...amazing composition, she looks so unreal...like a Siren...

Lucky guy you...she here like an Afrodite..stunning posing and so is your composing in all of these pictures and overall...I do not have competens enugh to criticise these, not necessary neither...you are a pro and that's it. Tnahks for sharing these pictures and have a nice year...