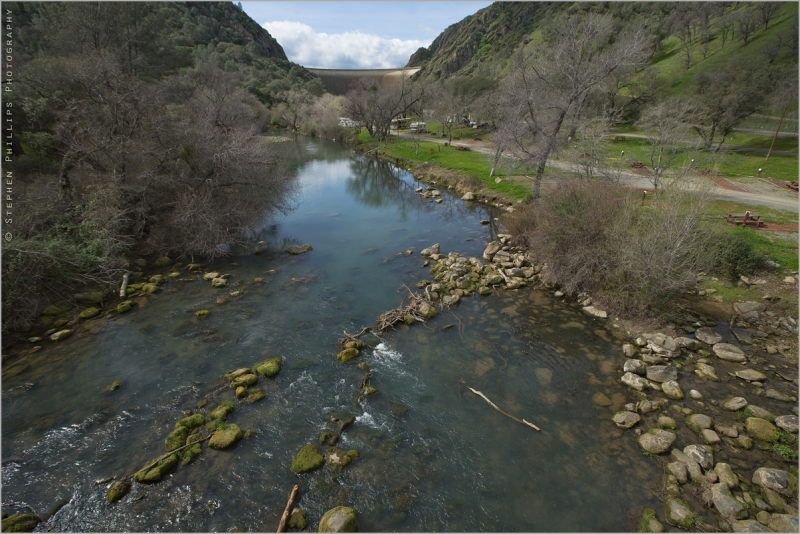 For those of you into such things - I encourage you to click on the link below - and then on the 'view map' link once you're there. It will show where I took this image and the dam (from above). Slowly 'zoom out'. It is amazing how much water is behind this little dam:
http://www.pbase.com/image/109952360

My Re-Discovery of Lake Berryessa (continued...)

My client who sent me on this effort is opening a market-restaurant-bar at an otherwise undefined place on the map called 'Barryessa Corners'. This spot is at the junction of California State Highways 128 and 121. It is not on the lake nor does it have a view of the lake. It is one of those places that is defined only by the crossing of two roads. It has also been vacant for years.

My client is also an old and dear friend - Mike Schildknecht. He is investing a bunch of time and money in launching this place. I won't mention what the economy is doing. I'll just say that Mike is a gambler and I wish him well.

His idea is to have my photography on the walls of the dining room. He is paying for the images we place and allowing me to sell them - and any other images I wish to purvey. How could I say no?

This was the inspiration behind my reluctant return to Lake Berryessa.

I had never been more than half way up the lake - and never took the narrow 'Berryessa-Knoxville Road' up to its end in Lake County. The images I'm doing for Mike's dining room will all be black & white. What follows are the first three - images all from this drive on March 6th.

The entire road along the lake and then up to Lake County is a mere 73 km (45 mi.) - but according to Google - the drive time is 1 hour and 50 minutes. With my camera it took more than 5 hours.

I'll also mention that the lake itself is a mere 111 km (69 mi.) from downtown San Francisco. When you see what's here - you'll understand how shocked I was at having missed this all of these years.

love the angle Stephen... its like everything is converging towards the dam... :)

Love the converging look in this shot, awesome!

This is a really good photo and the place looks absolutely gorgeous. Cheers for sharing.

The converging is excellent

This looks like such a wonderful place. Love your high-in-the-sky point-of-view.

It's fantastic, the way you composed it make the eyes start at the top and slowly draw, with great pleasure...at the bottom, bravo!

It's a pity that the restaurant cannot enjoy a view of the lake... Time, and only time could tell if your friend has made a wise bet! Yes, let's wish him well. Great angle to take this shot, Stephen; I'm amazed by all the fine details that can be discovered in the larger version. In the meantime, I'll be waiting patiently for your next pic.:-)

@hugo poon: Thanks, Hugo. "Gambler Mike' is actually coming to San Francisco and meeting with me the afternoon. I will tell him of your good wishes from Hong Kong - he'll get a kick out of the international focus!

I definitely see California in this. It reminds me of my time as a kid in the San Bernardino mountains.

@Twelvebit: I can fully appreciate the 'California' quality you see in this. I was in San Bernardino not long ago and know you've seen a bunch of changes to that once sleepy town.

so beautiful...love the rocks and seeing the road alongside

Great perspective on the stream. I love finding little hidden treasures like this place. Looking forward to more...

It's a lovely approach to the dam and lake. I'm anxious to see what's to come.

The image is wonderful in color, very wide and deep. The place must me paradisiac. And your exhibition great, as I see :)
I woul like very much to see it in place, but it's an impossible.
Are you going to show also the pictures in b/w?
I'm travelling next Wednesday to Syracuse (NY) to give a lecture in a college. I hope to have time to shot some photos over there.

@Paco Díaz: This is good news to hear you are heading for Syracuse. The weather can be near anything in March. I hope you are able to get around and explore the area - it is beautiful.

It's amazing how much more interesting a photo becomes when there's a story behind it..... the shot is wonderful, and how cool that your shots will adorn the walls of what sounds like a very cool little dining place...... If I ever get out there again, you will have to take me to check it out!!!

@Susan: You are on Susan - just say the word.

Very beautiful. Great perspective. I looked at the map that you posted and it is amazing.

@dogilicious: Glad you went for the tour!

ahhh lake berryessa, nearby vacaville! never knew they had beautiful sights like these! I shall visit when I have the time! Excellent shot stephen!

A beautiful place and super shot, good reflections on the water. Looking at the map, we can see that the dam is very secure between the two mountain sides. What is its purpose...?

@Observing: Regional irrigation in the Solano and Sacramento Valleys was the primary purpose in its construction. Recreation is the popular by-product.

Definitely beautiful country Stephen. Looked at your gallery and the pictures are gorgeous. Good luck to your friend and his business endeavor. Glad to hear someone is starting a new business along with job opportunities, wish him the best of luck. Surely looks like a great area from your photo's.

@John Maslowski: My restaurateur friend, Mike, was just here at my office. I passed on your good wishes and then showed him your website. Mike is from 'Jersey and he was just blown away by your portfolio. When today's image opened he instantly exclaimed, "The A/C Boardwalk!" You have another new fan.

Beautiful shot! The reflection of the sky in the water is wonderful.

I really like the angle in which this shot was taken. You are just high enough but not too low. The rocks are just beautiful. I like the image because it is natural looking and not over processed. Very nice.

It is great to see these shots of Lake Berryessa - when I was very young we went on a ski/camping trip there. How is the water level after these storms?

@Scott Schilling: I was up visiting the Lake three weeks earlier and our two plus years of drought were adding up to a most depressingly low lake. It then rained heavily for two weeks and the change is dramatic. You'll get an idea Tuesday and a really good look here on Wednesday.

Question for you: How long will your Yosemite prints be up at the Photography Store?

Ohhh i like the perspective! The clarity and colour are fantastic! What a beautiful place.

What an impressive building…

Beautiful pictures! Although Mike is not with us anymore, his adventure was successful and he has left a legacy for the Berryessa area! We loved Mike and will miss him!

I absolutely love googling my dad's name and finding hidden treasures all over the internet. I miss him every day. Tomorrow would be his 58th birthday! Thank you for keeping these stories alive and providing me a safe haven to remember my amazing dad!