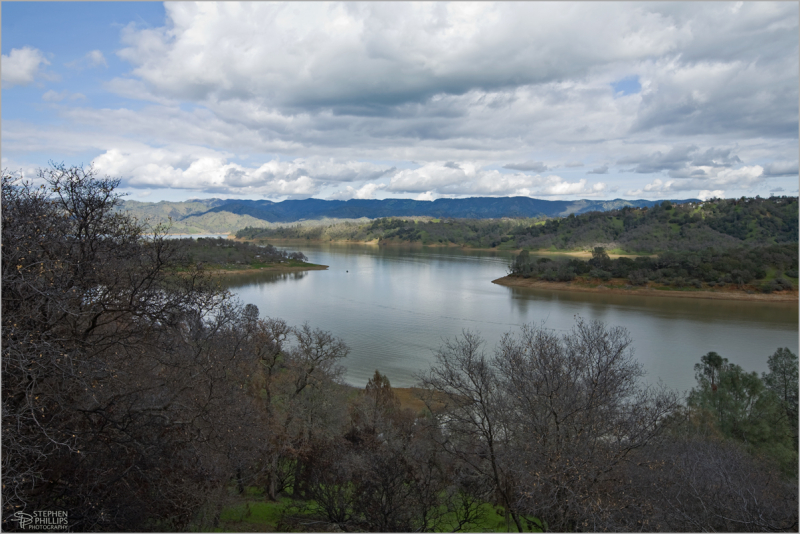 From this photographer's travels on Friday...

For many years - I've considered myself a knowledgeable guide and documentarian of northern and central California. I've made it a point to seek out and travel even the remotest of roads throughout the region.

This Friday - on assignment - I set out to photograph the nearby Lake Berryessa. The main highway - State 128 is a road I travel frequently. It goes right by the dam and the lower portion of the lake. Because of the mountains near the dam - you can see very little of the lake along that road. I had last traveled the narrow road along the west side of the lake back in 1971. Based on that experience and conversations with people since - I could find no good reason to return.

The 1971 trip was in late-summer and very hot and dry. The lake is a Bureau of Reclaimation man-made reservoir which was very low - having given much of its water to the irrigation of the lower Sacramento Valley. A wide band of uniform brown lined the huge lake. Sort of like a bathtub ring. An unmistakable pointer to the amount of missing water.

The hills were dry and parched. The air - stifling and still. The sounds of powerboats pulling sunburned people on skis filled the afternoon. An endless cacophony of many buzzing engines. I was with a woman friend. We were hiking along a trail which led to my first encounter with a fully grown rattlesnake. She was terrified - I pretended to be brave. Lovely.

It was - and remains a poor man's resort area. Most of cabins are old and poorly built - or on wheels. No modern hotels. No chain restaurants.

Like I said - I couldn't find a good reason to return - or even a bad one for that matter. And I wasn't overly excited about this trip - despite the fact it was a really beautiful day. Was I in for a shock. This turned out to be a photographer's dream assignment.

I've ridden on several bike tours that went by this lake. Beautiful country and you've captured is very well.

beautiful landscape, Stephen, and more seen in large. The sharpness and the light are splendid and the cloudy sky puts a special light.

An interesting read. I'm looking forward to the next instalment. Nice photo Stephen, it certainly looks like a beautiful place from what I can see of it.

A fine landscape shot for starters... Your story makes us want to know more about this place...

how beautiful and tranquil this landscape is!

So many layers and subtle tones here !

what a great and pleasant landscape

very subtle and beautiful colors - can't wait to see the rest of the images....

@Lorraine: Only WE can determine what is not accessible. There is nothing wrong with this - but it might be useful to keep in mind.

A beautiful shot...lovely in these muted colours.

It looks a fine place to be, sometimes it's good to escape from the commercial chain restaurants and marauding crowds :)

@Observing: Oh yes ! - I couldn't agree more and I'm always grateful for places that elect to not have them. This isn't the case here. I use this as a pointer to the desirability of this area from a marketplace point-of-view. It really feels like 'Baltic & Mediterranean Avenues' of resorts. ( ...if you pass 'GO' - collect $200. )

Wonderfully beautiful landscape and perfect capture... Love this soooo much! Can't wait to see the rest!:-)

@hugo poon: One more 'set-up' day tomorrow. I hope my 3 images are worth the wait.

A beautiful landscape and interesting set up. I'm looking forward to learning about the surprises that you found.

That's a nice winding river and the clouds are wonderful. Great scenic.

If this is a precursor to your travels, we are in for a treat. I love how the background in this photo pulls you in due to colors of the clouds and the darkness of the hills beyond hidden by their shadows.

lol at your rattlesnake encounter. Beautiful capture. Looks more like a river.

@sherri: Thanks, Sherri. I love the satellite view of this place - it does look like a river near the dam and quite some distance back. There are several steep canyons creating this appearance. Then - the whole man-made lake opens up and reveals a body of water more than 12 miles long and 3 miles across at its widest.

A lovely scenic. My most recent return to California was to the San Diego area. I saw many beautiful places and thought it would be a great place to live, but I couldn't help thinking that if I did live there I couldn't afford to enjoy those places.

A beautiful and vast landscape that you have captured here. I love the depth as well.

i looked at the second image first, and read your description, and thought "sounds like a dream assignment." then i read those words with this pic! gorgeous shot. and, thanks for the link.

@grant: Cool, Grant - glad to have you on board.

A very nice landscape, and a very interesting text…

Mike loved your work and we would often talk about your photos in the dining room!

@Amber Payne: Thank you Amber - needless to say - I am immensely saddened.