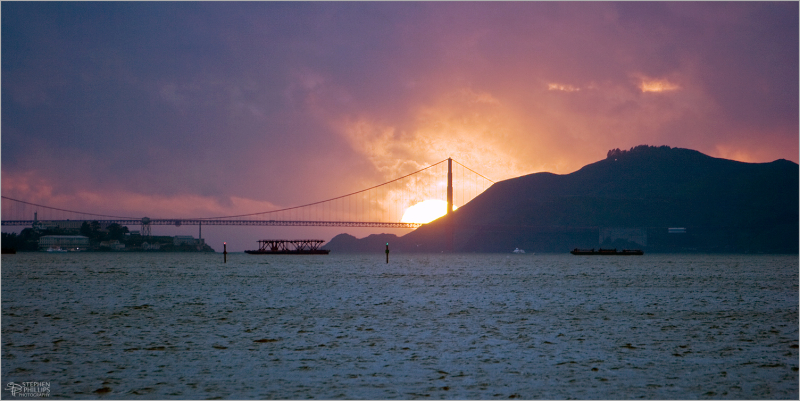 I was running some chores in The East Bay yesterday. It was a very rainy day. Around 2 PM - I was about to start back to San Francisco when the sun started finding holes in the clouds. So I headed east instead - wanting to try some images at Crockett. I got some good images - a few of them will likely appear here sometime soon.

By 4 PM - the rains returned and the sky was dark in every direction. Photo time was over.

I grabbed a quick bite to eat and started for home. It was raining as I drove through Berkeley, less than 5 km (3 miles) from The Bay Bridge. As I approached the turn that would take me onto the bridge - the sun began appearing out of the clouds. I immediately exited the freeway and pulled into a small park along the bay shore. I didn't bother to park the car.

I ran to the back and opened my camera case. Check the ISO, manual focus, light balance, image stabilizer setting. I ran to the shoreline - leaving both car doors wide open and began shooting. It was over in a minute - and this was the result.

As I started back to the car - an Asian couple in their mid-thirties were sitting in a car looking at me. The man behind the wheel called across the woman to me, "Did you get it?" - he was grinning.

"Oh yes - I got it alright," I found myself saying. They both smiled broadly as I continued, "...wasn't it beautiful?"

Stephen, this is one of the most incredible sunset shots I have seen! I am glad you pulled off the road - an awesome shot! You got everything in this also - the bay, the boats, the pieces of land on each side and the bridge - wonderful work!

@Scott Schilling: Thank you, Scott. A small correction for you - I did not get the whole bridge. That is Alcatraz on the left side of the frame. And those boats are three of the dozens of barges that are bringing pre-fabricated sections of our new east half of the Bay Bridge - which is under construction. The sections are being assembled in Stockton and then make the trip here. Pretty amazing.

The Golden Gate bridge never fails to take my breath away. This is just beautiful!

What a lovely shot, great sunset

Spectacular scene, Stephen. No matter how many countless times in my life I've seen beautiful sunsets and sunrises , each new one is more thrilling than the last. Great capture.

Claude B from France

I have enjoyed the adventure you tell us, and it increases the pleasure of looking at the photo -in larger it's great. The sun behind the bridge and among the clouds makes a wonderful composition.
I like the way you live photography, it's marvelous.

What a great natural fire !!

This image was well worth all the efforts you took. Beautifully colored sky and a fine composition.

How beautiful!! This is a great photo and a very fine composition! You perfectly caught the sunset light. Great work!

A classic and brilliant scene !!

Great story and an even greater shot. Very beautiful.

Another great shot of that bridge that holds my heart!!!! You are just sooooooo lucky!!!

@Susan: A quote I heard a long time ago - and don't know whether I heard it or read it or who said it - went something like this:
"Patience is the hallmark of a good photographer - and through patience - we find luck."

Truly, timing is everything. But knowing when to take advantage of that timing is up to the photographer. Glad you trusted your instincts on this one. I echo the person who said to you "...very beautiful."

wonderful shot - so glad you were able to capture it (sometimes it is better to be lucky than good!!). Also glad you didn't crash your car trying to pull over and capture the shot!! The colors, lighting, and composition are marvelous - really really beautiful....

@Chris: Hi Chris - thanks. When that sun began dropping below the clouds and behind those hills - one couldn't mistake what was about to unfold. I knew I had very little time but that both cameras were ready. I went with my little XTi because it had my image stabilized telephoto on it and I could forgo the time required to set my tripod.

Oh yeah, one of those moments you just can't miss: Splendid!

Dang it all... Chris took my line! But it's worth repeating: Wonderful shot, Stephen! Major Bravo!! I'd say this is definitely the Am3 Blue Ribbon winner for today!... a bona fide "money shot" if I ever saw one! And your narrative... great fun, really adds to the picture, too. Thanks so much for staying in-the-moment re the afternoon's potential, and for sharing your adventure and its extremely successful result!!

@Tony Duque: Thanks so much for the kind words, Tony. I love the weather this time of year when the sky can change in a matter of minutes - or even seconds. Speaking of weather - how did Raleigh do in the Great March Storm?

gaaa i love the bay.
it seems every day is brand new
scrubbed clean by the fog and the sun
and the breeze. and this morning
the wonderful rain.

@Seraphine: Thanks for The Bay - the weather - and your wonderful prose.

One of those got it moments and you got it.

how great is this ... the colors, the compositon with the bridge, the atmosphere...
reminds me of this morning on my way to work - we just don't have any water around here like this... ,)

Beautiful capture amongst the warm colors of this iconic structure of San Francisco! Your timing couldn't have been better. Sometimes a cloudy sky is an asset to what is captured. Coincidentally this Chicagoan shares an image of that same structure today.

Incredible! I love the vision of you swerving through traffic and running away from your still rolling car towards the sunset to get the shot. Luckily in your version the car waited for you and didn't end up at the bottom of a ravine. I always say the "lucky" shots are the best ones because they're the ones that you could never plan for and just have to follow your instincts to capture. Your instincts are good.

@willow: You have me laughing at your version of my capture. The 'ravine' my car would have wound up in - would be the bay itself - a wet and salty parking solution. Thanks, willow.

Ok, so did patience have anything to do with you living near this bridge? I have all the patience in the world (sometimes!!), but I think I need pure luck to relocate and live close to the Golden Gate!!!!

@Susan: Fair enough, Susan. I think we all get a little blind to what's around us. I'll never forget my first time on a Florida beach and seeing manta-rays, porpoise, an egret, and an eagle within a few minutes time and going nuts with excitement!

That said - I am very grateful for this place I call home.

So beautiful...terrible that a storm is so often more beautiful than calm skies.

@sherri: I'll have to confess that I love storms. I love driving in them. Love the drama. This is made much more so living here. All of our weather generally comes in the five winter months. The rest of the year is pretty much blue sky inland - and fog along the coast. That gets fairly boring after awhile.

Hey, Stephen, so glad your patience and passion (obsession?) paid off so nicely in the end - you've captured such a wonderful moment!!!:-) Sunset, and sunrise, are a simple beauty but also two incredible wonders. Isn't it wonderful that they happen again and again yet they will never become a stale repetition of something that will lose their charm...

@hugo poon: Much wisdom in your words, my friend. Many years ago I knew a remarkable young girl who was eight years old at the time. We were walking along Baker Beach, here in the city. It was warm and sunny and incredibly beautiful. At one point she came running up to my side and said, "You know what, Stephen?" She paused just a moment and concluded, "The best things in life really are free."

I'll never forget that moment and her wisdom.

I am happy to report that this woman is now in her twenties - living in northern France - creating art and working with horses (which were always her favorite creature).

Beautiful photograph Stephen !
Few days ago, I was watching a movie and had a bridge make me thing about your pictures of San Francisco Bay bridge.

@Alain Berger - vu@granby: Thank you for this, Alain - I am touched.

Amazing shot, Stephen! You should be quite proud. Glad you were able to pull over and get this great capture for all of us to drool over!

@Lesley: Hi there, Lesley - it is good to hear from you. For me - pride has nothing to do with my imagery. I was happy that this amazing sunset unfolded before me and that I had the opportunity to safely stop and get the capture. I just love working with photography and find moments like this to be deeply satisfying. I'm glad you like it.

Perfect capture Stephen. Love that glowing sun. The scene look so Oriental and beautiful. Stunning picture in every respect.

@John Maslowski: Thanks, John. My jaw dropped when this happened. There hadn't been a hint of sunlight to break the rain clouds for more than two hours. The sizable hills of the Marin headlands blocked what was about happen from my view - until I'd driven far enough south to where I was opposite the Golden Gate. It was, indeed - a magnificent sunset!

absolutely beautiful- I have seen so may shots of the bridge, but nothing like this! Luck is one thing, but you have to be ready too!

Incredible capture and a most enjoyable story!

Gorgeous! I finally had my 3-hour class about night photography..... Can’t wait to go out there and start shooting some great images! I always admire your night photography and maybe one day I can show off my images. (grin) We did some fun exercises painting with light - what fun!

@Magda: Very cool. Let me know when you do a shoot.

One of the most beautiful sunset I've ever seen…

Sometimes you've got to hop. Can't say I see stormy in that relatively calm water though.

@Twelvebit: Oh, it was lovely at that moment. But it was one of those days of intense rain for the most point. A storm that came in from the tropics - on what they call 'The Pineapple Express'. Come to think of it - this sunset looks like something you'd see in the South Pacific (except for the bridge).

Ohhhhhhhhhhhhhhhhhhhh this is great....
I am slowly learning more and more each time.... of late I have been somewhat 'bad' when it comes to photography as I have been SO busy at work...
I envy your gorgeous work....