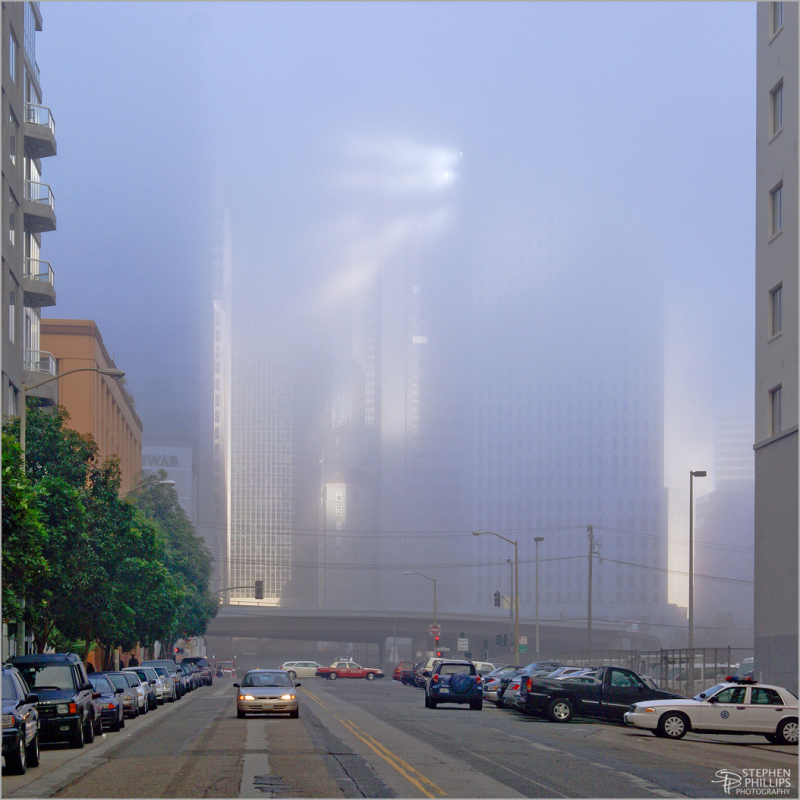 My office is along the sidewalk in the building at far left. This was the scene as I arrived at work yesterday ( Friday - 09 January 2009 ). My camera was in hand, so...

The sun is actually behind my right shoulder as I take this - so what we're seeing is kind-of-a solar bank shot off some office building glass.

The picture is great, but I can see, that "your sun" has got also some difficulties to shine clearly, our sun has different kind of difficulties, it is so near a horizon, that only the tops of trees can get now sun rays, but it is going better every day :).

Nice weekend to you!

@LeenaM: Thanks - we are through with the darkest days - may greater light and warmth surround you. A metaphor for more than celestial workings...

This is fantastic Stephen, that blur and sunlight is magnificent...no I can't stay away, do you blame me? :)

@Lorraine: It was beautiful - and my camera was walking up the street with me. Joy!

Wow! What a capture! Simply great!

What a fabulous shot, Stephen!! It almost looks like there's a spaceship hovering behind that building! I'm amazed that the sun is actually behind you. Very cool shot.

What an amazing sight Stephen! And it's so well captured!

Spectacular capture Stephen! The light through the fog is fabulous!

Always on the edge, the scene is made more dramatic by that vehicle bearing down on you. I must say those trees lining the street bring some real focus of the scene and provide a nice grounding effect to the color pallet of this muted, foggy photo.

Superb capture. The buildings shrouded in fog take on a surreal quality.

Wonderful capture of the sun poking holes through the fog!

Very cool - almost looks like there is an explosion behind the buildings. Kind of surreal.

amazing photo! (watch out for the cop.)

@grant: Dear Grant - much thanks and not to worry - - - that building on the right is a U. S. Postal facility - and that is a postage stamp cop car...

cool lighting in this photo. success!

Great reflection in the fog, I really like this one.

A very interesting effect.I love a good sea fog,it reminds me of growing up on the coast back in Wales !!

I like this shot a lot, with this coming light

just great again. really good seen and i like the composition.

have i already said that i love this series? ;)

Spectacular.... this is simply amazing to see.

great capture of light in the fog.