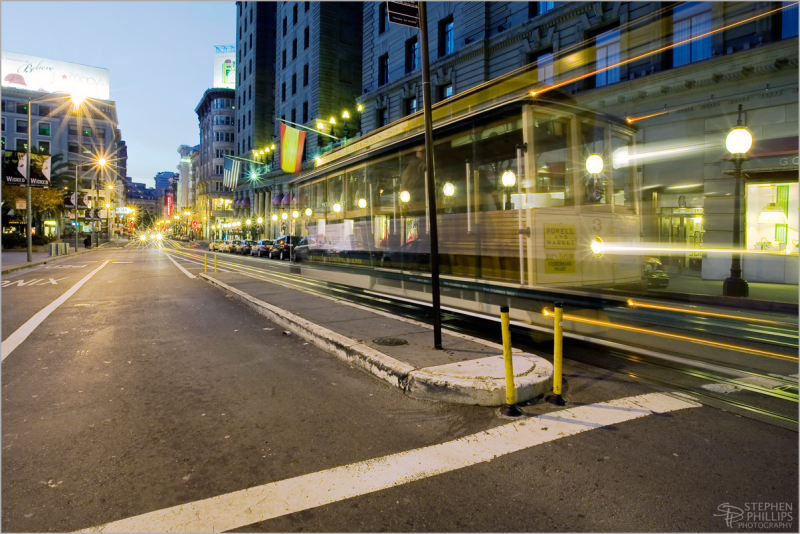 This was one of those accidental strokes of luck that befall a persistent photographer. I'd been at Union Square that pre-dawn - photographing our Macy's Christmas tree ( 22 December 2008). I had no intention of shooting a cable car that morning - I was crossing the street with the thought of getting a wide view of the square.

Yet here came this cable car - on its first morning run towards Fisherman's Wharf. The camera was on the tripod. The exposure more or less set. As the old relic stopped and without much thought - I was placing the tripod and depressing the shutter release.

It was a 8 second exposure. Just after it began, the cable car pulled forward about five feet. After resting about three seconds - the signal changed and he was off and rolling. I almost deleted the exposure. It didn't seem possible I'd have anything worth saving.

i am VERY glad you didn't delete the exposure... it's absolutely wonderful - the colors, the lighting, the composition...

@Bernard: Thanks for the kind words, Bernard.

I am glad you got the chance to shoot this amazing image.

A wonderful shot.It´s 8am here now as I´m viewing this picture and thinking,"what a great way to start the day" Cheers Stephen !!

@Anthony Lambert: Happy to be of service, Anthony. Thanks.

An excellent stroke of luck. Turned out really well. I'm just wondering why your EXIF data doesn't show up to the right of your pictures?

@Mike: A fair question - It has to do with my work flow through Photoshop™. After creating a large 'master image' - I create a smaller version via the 'save to web & devices' option which unfortunately strips the EXIF data. I experimented doing this another way but much prefer this method. I am always happy to provide the information on any post.

I really like this one, Stephen, and all of your motion-blur shots. You inspired me to give it a try around town, and I just happened to have posted one today, also.

@Eric Fry: Hey Eric - glad to hear from you and I can't wait to see your image. Right now - I'm running for the door for an out-of-town appointment. See ya a little later...

you couldn't ask for a much better shot!

You are a lucky photographer, my friend, and did it perfectly, as we can see in this image.
The hazard makes that Eric posted one on the same subject this morning: I will try to do one similar here in Mallorca.
And I like to see the Spanish flag there :))

Agent Phillips - the truth is out there! Proof positive. Wonderful capture.

Nice work on this motion shot.

Well done. The stop and start during the exposure makes it look like a ghost train.

@dogilicious: Indeed - and I came so close to erasing it on-the-spot. The 'ghost' must have stopped me.

It shows once more that one should never delete before seein it on a big monitor. Talk about serendipity!

Luck goes to where the talent is! Amazing shot.

Wow, Stephen, how spectacular!!! This is life, what you want may come or may not come, but when it comes, it comes incidentally... O.K. I love the subtle treatment of the yesterday's pic, but I enjoy these star lights just as much.:-)))

@hugo poon: Thank, Hugo - your portfolio proves much the same process. I love detailed 'realistic' imagery - but nothing creates more joy than trying things that are out-of-the box. I work for and love the unexpected. Neither exploration negates the value of the other.

maybe a bit too much yellowish but i like very much how you captured the movement on the picture. and the contrast between the lights and the deep grey/blue house walls...

Great capture of motion and exposure is perfect...

what a great "accidental" picture - really a great capture and lucky that you were in the right spot at the right time.....

Amazingly beautiful. Love the colors, sense of movement and the star flare from the lights.

THAT deletion would have been such a mistake! Amazing, Stephen! Just beautiful!

I am glad you did not delete this, such an interesting capture with the lighting and light trails, add the beautiful colors makes a great shot

i started to write "very, very cool" and then saw willow's comment. but, that's what it is!

@grant: Thanks, Grant - I love the idea of 'Time Travel' at 9 miles-per-hour, which is the speed the cable moves at.

Great photo - I love the movement and then the clarity of the rest of the image - awesome! I also use the same process you do for exporting your photo from photoshop using the save for web command - it gives me the best looking option for computer viewing - however, I never have any exif data either - kind of a bummer!

@Scott Schilling: I'm glad you took a look at this too, Scott. The 'save-for-web' feature is the only way to go.

The lighting and motion effects are spectacular in this shot. Love those cable cars. Excellent perspective and view of the downtown.

EYES WIDE SHUT from The library of my soul, United Kingdom

This is simply awesome. The effect works so wonderfully. The ghosting is amazing

WOW This is what I call an amazing lucky shot. And I'm glad you didn't delete it. This motion effect is great and if you didn't explain that is was an "accident", no one would understand.... SPLENDID!!

@Rui: Thanks, Rui - I learned some time back that part of being successful in photography is positioning one's self for the opportunity of 'luck'.

@Rui: Mmmmm. Interesting thought. I'll need to ponder that a bit. This would apply to both good and bad luck, of course. As Spock would say, "Fascinating, Captain."

Being in the right place at the right time, having the skills necessary, envisioning scene, having the right equipment and then a major dose of engineered skill (or luck). But in reality, most of it is just taking the chance and taking it often. Image what would not have happened if you had just said, "Nah, it won't work." .... note: I finally got lightroom and cs4 so any tips like exporting to web are much appreciated. Got a learning curve ahead.

@Walter: Hey - thanks for the observation - and congrats on the software. I'm still chugging along with CS3 and Lightroom 1.4 - so you're a version ahead in both cases. But my exporting path goes way back. After I create a master image - I create a duplicate - add my copyright bug - size it to 8" x X" at 150 dpi - and use the 'save to web and devices' tab at "up-4". From the image at the upper right I use the slider to set the image between 680 - 700 KB and save in a separate web folder. I highly recommend you buy Scott Kelby's book on both software apps and develop your work flow based on his methods. He'll also teach you a bunch more. Well written and easy to digest - even through my thick skull.