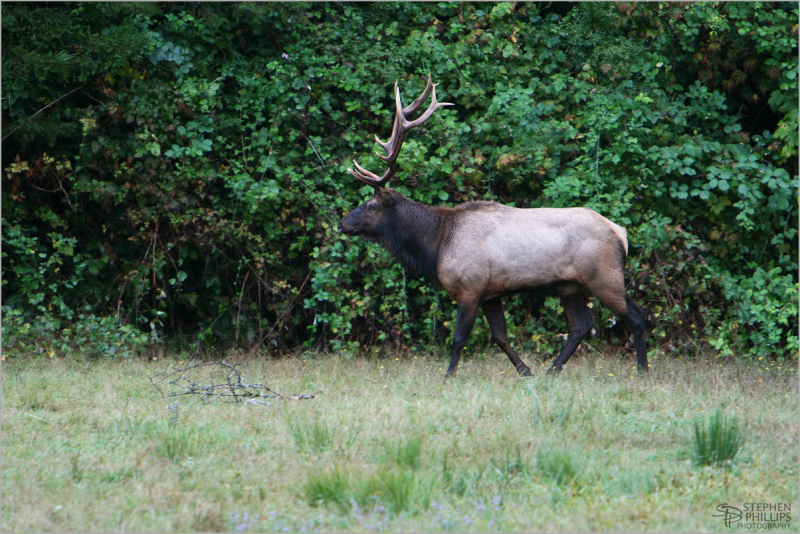 ( third in series of four images )

Moving majestically in along the south rim of the meadow which contained the thirty female elk (cows) - this fellow made it clear why the eight young males I had passed north of here were keeping their distance.

Never - can I recall seeing a grander bull Elk. His rack seemed improbably large. His dominance over his harem - unquestioned. I was in absolute awe at witnessing this powerful display of nature. As he approached the females - they were rising to their feet - and slowly - purposely moving into a dark and tunnel-like entrance to the thick forest beyond the meadow - opposite of where I was standing.

All I can say is "Wow"... he's awesome! Fantastic that you were able to see this!

Very good capture! Quite impressive animal with those horns.

Holy cow! This guys a giant!

my favorite of these so far. truly awesome.

Thanks for this series - this bull elk's entrance into the scene is so dramatic. Great photo!

Very nice animal shot. Congratulations : he's not looking at you…

@Calusarus: Not today. Tomorrow, however...

I see why he has authority, what a strong looking beast. A perfect shot Stephen.

like the contrast between the elk and background, great shot.

I like very much this picture. The splendid male in its wilderness before our eyes.

oh yes -- he is certainly in charge, and he knows it!! :) wow! those horns are truly faaabulous -- wouldn't want to get on the wrong end of them! ;) excellent shot Stephen! Looking forward to tomorrows!!!

He is indeed majestic. I like that you captured him in stride - he seems to be moving so regally, so intent on his goal.

I was glad to read you were using a long lens with a teleconverter to get these photos. That dude is one big animal that I would not want to meet up close at all! Wonderful photo op. Cannot wait to see tomorrow.

@Walter: Thanks, Walter - good to hear from you.

Exceptional shot, I'm surprised you held the camera steady enough to get this great picture. All I can say is outstanding capture and you are right about that rack it is magnificent. Wow, Stephen this is really a superb image.

@John Maslowski: Adrenaline can help you concentrate - if only for that precious second as you squeeze off the capture. And I had more than my share after this fellow came into view. Of course, image stabilization doesn't hurt either. Great to hear from you John.

A beautiful image, superb composition, a lofty character, as befits a head herd.