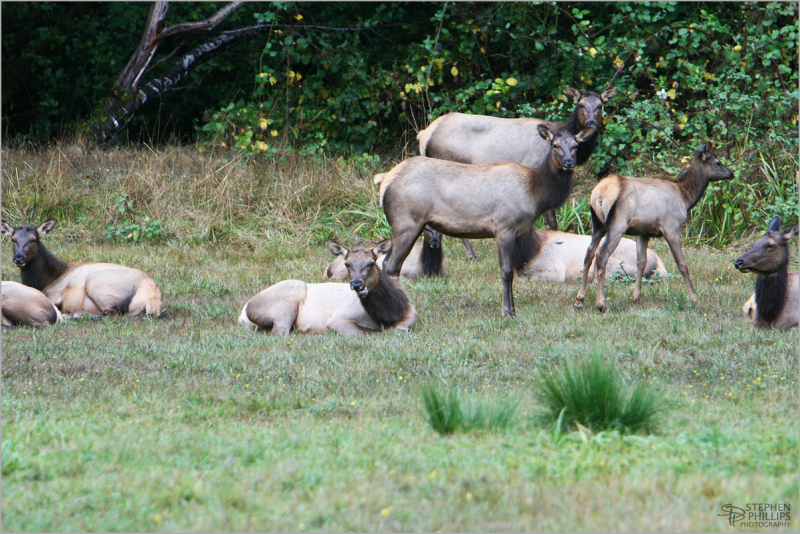 ( second in series of four images )

[notebook]: These are Roosevelt Elk - the largest of the subspecies.

This is a detail from a group of thirty female elk. As I wrote in yesterday's post - I was surprised, in that it is rutting season and eight males were in a group a short distance north. Yet, here were these unattended does.

wonderful capture. they seem to be intersted in your camera :)

Beautiful creatures! Are you comfortable focusing with an extender? I can't make my mind buying one.

They are stunning, lovely compo, you're not bothering them at all, must be a good soul ;)

Magic... love it, how they are looking at you, the sun on them, great shot!

Great image Stephen! I really like how they seem so blassé about being photographed!!

Hey, they've spotted you! This is very nice work with a relatively short focal length fot this kind of photography.

Another great one, but i prefere the excellent yesterday one, because today there is more animals but the picture is less legible, animals are the one on the other ones (sorry it's difficult to express my feeling in english, hope you unterstand what i mean... :-)

@Evelyne Dubos: I agree - and believe I understand your point. I would have preferred to shoot this wider - taking in all of the cows - but had to weigh this against the risk of moving from my position and the time it would take to get another camera from the car. So, I included this image as it is necessary to tell the story. I hope you manage to view the next two posts here. Thanks, Evelyne.

Of course Stephen... and i know it's not easy to take such pictures...

And such lovely young elken maidens these are. I am sure the adolescent males from yesterday's shot are pining for their attention. But... I know enough about elk to know there is surely a bull elk or two hanging around and ready to add their genes to the mix.

Congratulations! 4 of 'em are looking into the lens! Great hunting shot!

Looks like the one in the middle has spotted you !!

I'm on safari...! wonderful image of the wild animals.

beautifully done Stephen -- and they are visually engaged!! what an accomplishment! they aren't running -- in fact they seem quite curious!! maybe they sense that you are a 'funny' looking male elk and wonder why you have a camera! ;) wonderful shot -- i love how they are spread out and falling out of the frame -- shows how relaxed they are in their natural habitat -- even with you in the area! bravo!!

@dj.tigersprout: I was chased by a large Elk many years ago. It was this time of year and up in the main park. Rutting season and when there are young - are the two times of year it is seriously dangerous to approach. The Elk in this area are fairly comfortable with having humans around. Just not too close.

Gorgeous animals and a beautiful capture.