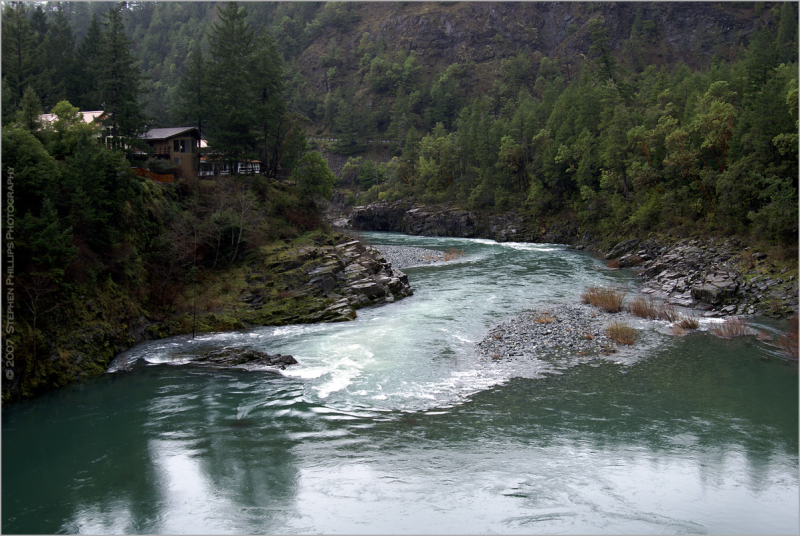 Rainfall on the Smith River

This is the northern most major river in coastal California. Here, just above the Jedediah Smith Redwoods State & National Parks.

[notebook]: This image was loaded before I left on my trip to Oregon. Ironically - as I drove along this same stretch on Friday - it was raining heavily. The rain was so heavy - I couldn't have taken a photograph if I'd wanted to. This is rare this early into the wet season. Major rains don't usually fall on California until well into November.

I was thrilled at the imagery I captured these past two days. I hope to begin sharing them here - beginning Monday. It is good to be home. As I type this - it is raining heavily on my living room window in San Francisco.

Great composition. The river makes it inviting and interesting.

Wave is really interesting on this shot.

The water looks so green and beautiful. What a great view.

Bottle green rivers, they're my favourite, wonderful, wonderful photo, I'd love to live there :)

@Lorraine: This was taken early last spring. The winter rains had scoured all of the mud and sediments from the stream - leaving the waters crystal clear. One of the many reasons that I love that time of year.

I love that glassy green colour of the river in the foreground...beautiful.

Love the softness of the colors and the composition. Really nice!

That's a beautiful shot Stephen, how the wide river in the foreground brings us right into the center of the frame, excellent. I wouldn't mind one of those houses :)

Your report on the unusual heavy rains..... an indication that our climate is changing...?

@Observing: There are many pointers to global climate changes. This is NOT one of them. California has a fairly predictable wet and dry season pattern - but there are many examples of exceptions and exceptional years since records started being kept in the 1850's.

such a beautiful place, and very well photographed.

Beautiful. California has all the best scenery, packed into one state. No fair! Haha!

What a nice shot... nothing nicer then a river... so relaxing...

A beautiful picture, I really like the color and brightness of the water.

yes -- isn't the pre-November rains something of a scare? has me creeped out! ;) wonderful shot here mate -- this river looks wonderful -- i bet there are some great rapids along parts of this! beautiful scenery and welcome back to CA! :)

@dj.tigersprout: You win that bet - DJ - this is a fabulous wild river - top to Pacific Ocean.

beautiful.. looks like a sudden gush of water came in at that moment u took the photo. v pleasing lines.. the river seems to lead to the house almost directly!