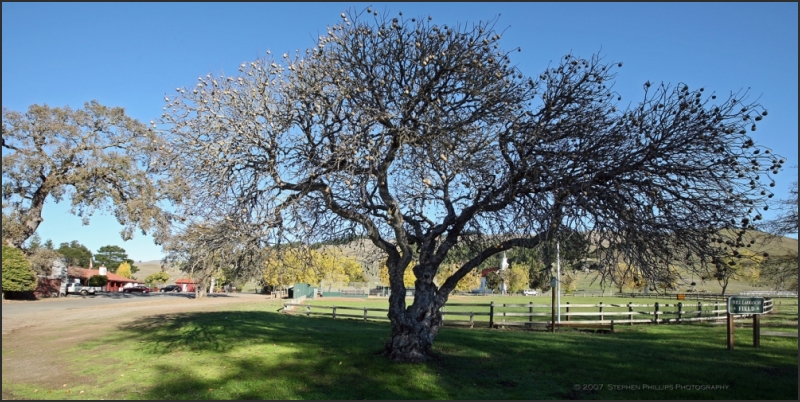 This is the downtown section of the tiny town of Nicasio, California. Under the tree limb, just right of center - stands the Catholic Church. At left, is the popular 'Rancho Nicasio' Bar & Nightclub. Aside from an historic school and a handful of homes - that's it.

(second in a series of two images)

Who needs more !! A great tree always makes for a great shot.Nice.....

My kind of town!

So that's it! Really a nice rural mini-series.... Thanks, Stephen!

It's a very picturesque little town. Thank you for that mini-series!

That's all I need a beautiful little spot like this, very picturesque.

paulski from Muncie, IN, United States

and a bustling metropolis it is! beautiful capture here, stephen...

The trees are magnificent, beautiful town !

The countryside at its best! Good work Stephen

nice country living...how is that bar ?

@alex centrella: ...my 'bar' days are long over - but I can still report that it is one of the best bar-restaurant-niteclubs that have ever graced the planet! They get some amazing headliners from all over the world that come to play there just because of the wonderful crowds and the laid-back setting. They provide really good food, sound, and service - yet sit far off in the middle of nowhere.

That's a great tree with with downtown Nicasio in the background! Nice cropping too.

A nice quiet little town. This tree is really photogenic. But what do we see in the end of branches ?

Francesc B. from région parisienne, France