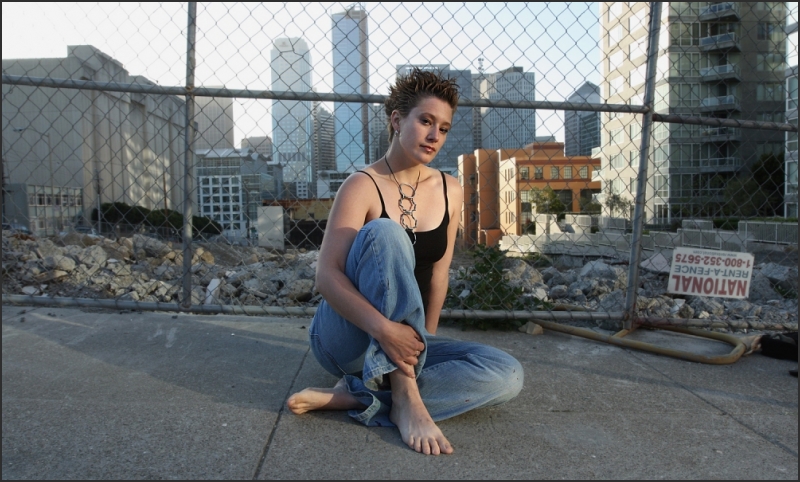 This photograph appears in the current issue of "Curve Magazine." It was commissioned to accompany an article on Nicole and her artwork.

Cole is an accomplished sculptor and painter. A graduate in fine arts from the University of Alaska - she now resides in Oakland, California.

What a cool setting for an artists portrait. She sure knows how to pose...

Very interesting composition, the light is sensational, congrats on the magazine commission Stephen!

Great portrait, very nice soft lights, was it early morning? The upside down label is way cool, adds a lot to an artist's portrait.

@yz: ...actually, this is sunset - just above the building where I keep my office. I'd been watching the light at this spot for several weeks and had taken some photographs here. When Cole called saying the magazine needed a lead image of her for the upcoming issue - I knew this is where I wanted to shoot her. The upside down label was muted in Photoshop. I liked it, too - but it was distracting. Thanks, YZ.

good shot Stephen, i like were you have taken this, works really well

Nice contrast between the beauty and the rubble and then the beautiful skyline. Great shot.

Interesting choice of locations. The contrast between her softness and beauty and the harsh realities of the city beyond work - somehow - to compliment one another.

paulski from Muncie, IN, United States

nice portrait; i like the lighting, and the background is great...

Nice pose and a great background,the model and the city make a good contrast.

As you already know Stephen, the soft natural light is wonderful. Congrats too !

you picked the perfect backdrop for this image, i love her expression also.

wow! a sleek, strong and beautiful urban portrait! much 'tougher' than the previous, quasi sensual / quasi alluring portraits of your other models! marvelous lighting and backdrop! excellent!!

Interesting shot. The soft light is simply what makes this photo special, highlighting the model's pose... being a sculptor (and a painter), this framing in a craftwork (I don't know if this is the correct word) scenario is just great. Fantastic work

Yes indeed, wonderful soft light on Nicole, the contrast with the city background is fantastic.

very interesting... love the background! the lighting is superb!