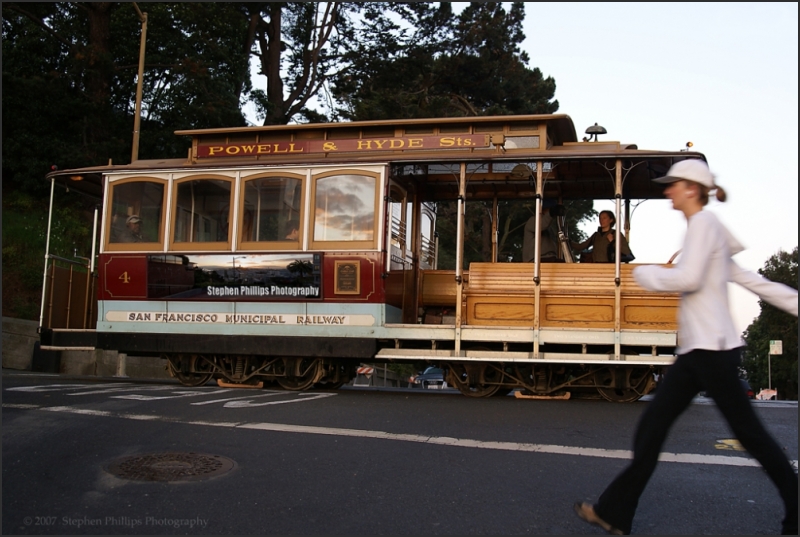 ...Several mintues after taking yesterday's image of the sunrise on "The Crooked Street" - I turned the tripod around and caught this image. The jogger is a nice touch I think.

If you look closely - you'll see an ad for Stephen Phillips Photography on the side of the cable car. (please don't tell the Municipal Railway) - shameless self-promotion. The cool thing, though - is that the photo in the ad is the sunrise I had just taken - now showing on the passing cable car.

What a nice idea of placing an ad here Stephen. :-) I am not sure I would have noticed it without your explanation. I have to look closer!

These are great, Stephen. I really like this one, and the walking lady really does set off the frame.

That's quite an ad agency you have that can get your work out to the public so quickly! ;) Very nice touch.

@Eric Fry: Goes to show - the most effective ad agencies are the ones you sit on.

Being new to this forum I wonder how much I should share about the pictures. I now know that some pictures really do well to have a little explanation behind them such as this one. "Shameless Self-Promotion"? Not. Excellent use of your work. In fact, it is a nice promotion of the city with such a great sunset picture. Nice one!

@Walter: Welcome to AM3!

Your question is a good one. Your best judgment should guide you. Frequently - when a post contains no description, it would be best served to provide one. A beautiful village with colorful people and lush light instantly begs - '...but where is this?'. Rarer is the person that drones on about something that is obvious. That would be the thing to avoid.

Long posts can make for a most enjoyable blog. We are currently being treated to a journal by DJ Tigersprout who flew into an Alaskan Village in the far north on the shortest day of the year. The haunting light in his photographs is fascinating - and I find myself hanging on every word in his story. His blog is http://visionlogic.aminus3.com/.

And I need to mention our daily prose author, Sherri Schaefer Bagby from Little Rock, Arkansas - who treats us to a beautiful image, an insightful narrative, and a closing literary quote - with nearly every posting. She provides a post that has become part of my daily routine - like the friendly neighbor that stops by to chat.

So, again, welcome. Bring enthusiasm to your photography and what you have to say. You will find here a welcoming community of critics and friends.

@alex centrella: Oh, no. No way. Not that. Thank you for the thought but in light of what the current fellow with the position is leaving us - I can't imagine anyone wanting this role. Nevertheless, on a serious note - I pray for leadership. We've been without for so long. We need a Roosevelt like statesman to right our path. There is peril in our land - at the hands of anti-government ideologues, corporations, and the self-righteous.

I guess I need it spelled out for me.....is the ad photoshopped or are you really advertising on the Muni Railway?

@Twelvebit: The sunrise on the advertisement is the same sunrise bing reflected in the widow of the cable car - that was the idea. Photoshop®.

Love how you've captured the motion of the walker...and gotta love those SF trolleys.

I like the motion of the walker, good shot

Muni could learn a lot from your entrepreneurial initiative and creative marketing!

a marvelous 'San Francisco' slice of daily life featuring a very apropos SF icon here Stephen! and i simply love your 'shameless' self promotion! it is a fantastic idea and fantastically achieved! it certainly looks real to me! :) and after all is said and done, someone's gotta do it, right? this is an excellent image showcasing some beautiful local 'color' -- this is the view all of us residents are treated to on a daily basis, and therefore this is the 'real' magic and splendor of the city -- bravo! (and a big, warm, heartfelt thanks for the faaabulous plug by the way! it has certainly brightened up my work day and week!! so thank you kindly!!) :D

@dj.tigersprout: ...you know my plug was sincere. Your Alaskan adventure is a perfect example of how - through blogging - the Internet as a whole, and communities such AM3 specifically - are changing the world and strengthening the bonds of human understanding.

Love the image...all of it. I personally think it's humorous the way you've put your name there. Actually, it's kind of like others marking an image. Your choice on where to place it:-)

Good early morning feeling to this and the ad is great.

Terrific sense of movement, Stephen ... I see your mark on the Cable Car ... clever!!