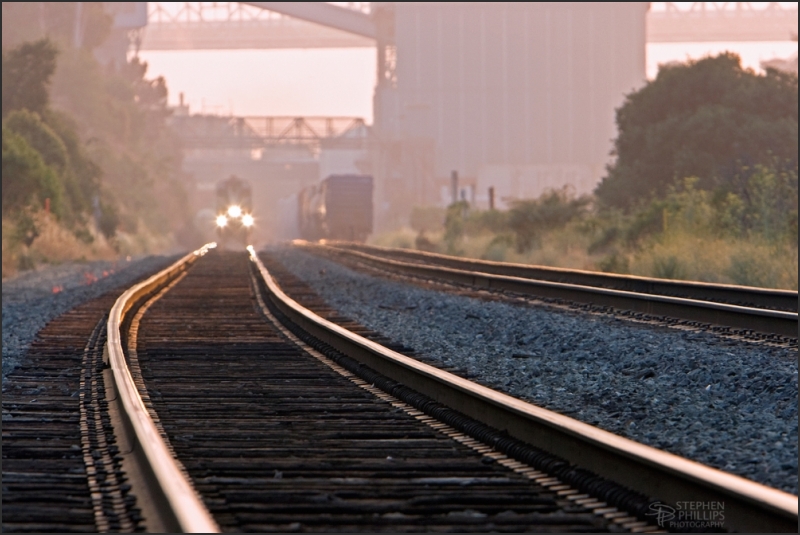 Image from late in the afternoon of 24 June 2008 - a time when the many fires in northern California were bringing much dense smoke to the area. The air quality through here would normally be pristine. Here is an eastbound Amtrak train rolling past the C & H Sugar Factory in Crockett, California - along the Carquinez Strait. I was on the tracks - focusing on the rail spikes in the foreground when the train came into view. My thought (of, course) was 'just what the image needs'!

The engineer was blowing the horn rather insistently - perhaps having something to do with the idiot photographer's tripod - low across the rail up ahead.

excellent local scene Stephen! love the light on the railways and the reddish grey tint of the air from the week long fires! the factory shapes in the background make for marvelous eye candy. :) i am off for a long weekend so won't post again until saturday night for sunday -- hope your long weekend is great! happy 4rth to you! :)

@dj.tigersprout: DJ - I just crossed you with Mirko - sorry - I caught it right after I hit send...

Still, have a great Fourth! Enjoy!

Shun from Mühlheim am Main, Germany

Stephen! i am a huge fan of railroad inspired photos. Yours is just great. So much detail and brilliant play with focus. The coming towards you is really an eyecatcher. I should have a look at my harddisk for train pics... Until today I only posted this one here at the blog. Not nearly as nice as yours... but still :-)

@Shun: Mirko - that link simply took me to your blog home page - so I poked around and I'm guessing you are talking about the image 'Cargo'. I really like that image. It is quite different from this one - but the sky, the curve, the repetition of the tracks and cars have it a compelling photograph.

The lighted rails are dragging me into the picture like a guideline, the lights of the train, the soft colors because of the smoke...great!

Excellent ! I like guideline, lights of train and composition with deep.

I like the perspective and the excellent composition, Stephen. Miss Bagby, the rail daredevil, sounds fascinating!

@Michael Skorulski: Michael - thank you. The Sherri Bagby reference is a bit of an inside joke. Sherri is one of my favorite photographers. She and her husband work together in Little Rock and she was instrumental in my blogging over at VFXY. Her posts most always contain some considered narrative - along with a well-chosen literary quote.

On Monday, Sherri had a photo she took while on railroad tracks - being interrupted by the sudden approach of a train. Hence, inspiring this post.

Fantastic image, got to be a dare devil to get the good stuff.

@See The Light: Not to much dare or devil left in this shooter. One of the benefits of telephoto lenses, is we get to bail - before being baleful.

Excellent, Stephen! I love railroad photos! Your narrative adds to it! The lights of the train coming toward you... I can hear the whistle blowing! Great shot!

@Betty: Hey, Betty - thanks - this was a fun excursion. It was hot and very smokey, but worth every minute. If you are interested - here is a link to the first of four images of the smoky sunset - taken in the same area later that day:

The risks a photographer takes for a great photo.Well done.

Love the tone, colours, shallow DOF... and yes, it's wonderful to have the train approaching!!!
(PS. Wondering if the atmosphere can be further heightened with bridge at the top cropped... of course, it's very nice as it is!)

Excellent shoot ! I just love it !

cool shot, like the lines leading your eyes into the image...

I was going to say the engineer was no doubt blowing his whistle at you. Very illegal to be on their property. Although I still take pics of trains coming there's one small town where I never go because the Sheriff, Barney Fife threatened me with reckless endangerment. Yep, I know, the wrong charge...lol It's in my archives....Incredible capture.

@sherri: I can just see ol' Barney - shaking and fumbling to get that lone bullet in his gun - going off to track down that loony lady with the camera, and Andy telling him to just calm down.

Life's good - so long as we take our own responsibility to stay on the right track...

Terrific perspective ... I like the way the light is illuminating the top of the rails drawing us in.

superb composition - love the focus on the tracks that lead one into the trains in the distance... classic railway photo and i love it!

Really, really like this one. I can hear the drama of the horn trying to clear you off the tracks. Great perspective. (I too would've cropped out the bridge span)

@Ted: Thanks, Ted - I'll have to admit - shooting this did provide a bit of an adrenaline rush. As to the crop - I'll play with this later in the week (busy period, just now) - I'll let you know if I post a different composition on my website.

m a r t a from Spain

Beautiful beautiful picture! I don't know if I would've been so daring to use a tripod though ;)

I love the leading lines in this one, it's really well composed!

excellent.. Do you have one where the train is in clear focus too? I know must be difficult to capture it when the train is honking at you :)